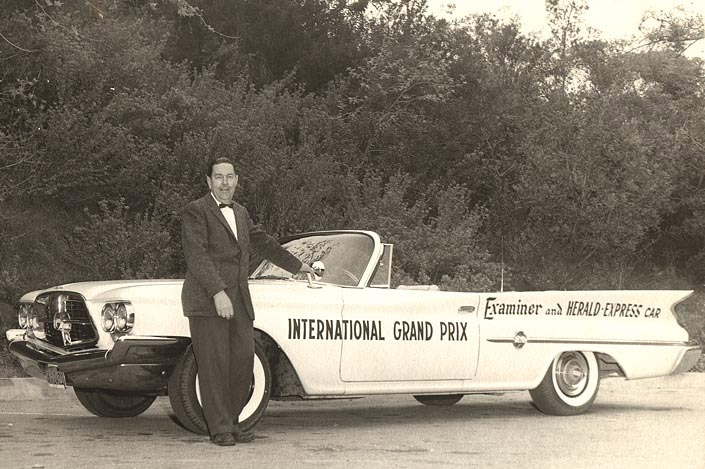 Shawn Doucette writes:
The 1960 300F in the picture is the Promotion/Pace or Grand Marshalls Car for the 1960 Formula 1 USGP held at Riverside International Raceway in CA. The race was sponsored by the LA Examiner and the LA Herald Express. These papers were owned by the Hearst Syndicate. The Chrysler 300F was probably chosen for the Chrysler 300 letter series increasing reputation during that time as a high performance car and its steady performance at the time trials every year. Unfortunately the race that year was not much of a success due to the American public's unfamiliarity with the open wheeled circuit and the fact that the LA Times had just run a "Sports Car" Grand Prix at the same track a few weeks before (which did very well with 70,000 people). Alec Ulmann the race promoter (He was also the president of Allied International and a more than avid car enthusiast) is the man I believe to be standing beside the 300F in the picture. He did little to help his situation as he publicly announced that the Formula 1 Grand Prix would do even better as the LA Times Grand Prix wasn't really a Grand Prix anyway. This enraged Otis Chandler, owner and editor of the Times, who persuaded his local and loyal press associates along with the Times not to give the Formula 1 race any publicity at all. Ulmann wound up paying the prize money out of his own pocket and although it took some time every team and driver was paid.